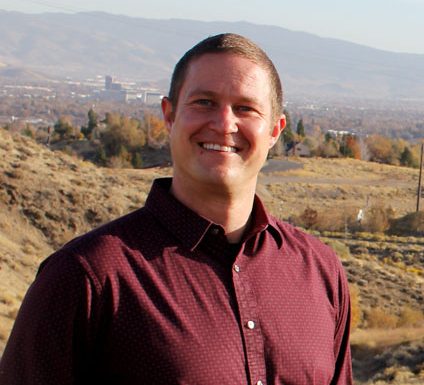 Mike has been in Operations, Sales & Marketing for over 15 years.  His passion for the environment and sustainability along with his expansive skill set has made him an integral part of the leadership for envirolution. Mike is from Las Vegas but fell in love with Reno during college at the University of Nevada, Reno where he received his Bachelor’s degree in Digital Media with a minor in Spanish.  He then moved to Monterrey with his Wife, Vanessa and worked with The Surfrider Foundation, Monterrey as Webmaster / Graphic designer. He also volunteered extensively at the community garden Vanessa started as well. During this time he put in many hours of beach cleanups, tabling events and manual labor.  It was at this point where Mike saw the value in volunteering and realized it’s absolutely necessary in order to become an asset to your community and give back just a portion of the tremendous gift we have all been given in the environment and nature.

When Mike came back to Reno, he wanted to become a more efficient advocate for local Reno initiatives and was able to develop many lasting relationships to that end during his tenure at Whitney Peak Hotel / CommROW as Operations Director. Mike has since volunteered extensively with Envirolution as well as at the Battleborn BMX Track where he races BMX in his free time. When Mike had the ability to come on as the Co-Executive Director of Envirolution, he could see that this was what his many years of development were all leading toward. In speaking to Mike about envirolution’s programs, you’ll probably first notice that he’s extremely personable and full of energy. At the end of the conversation don’t be surprised if you get a high-five.

Degree(s):
B.A. Digital Media with a Minor in Spanish from University of Nevada – Reno

“We do not inherit the earth from our ancestors; we borrow it from our children.”